Our subject has a ‘Subject Way’ at the heart of it. Our Subject Way is designed to help students become young subject specialists. The Subject Way has two main purposes:

It is our belief that knowing how what you learn links to the wider world brings a subject to life and therefore improves overall understanding and engagement. 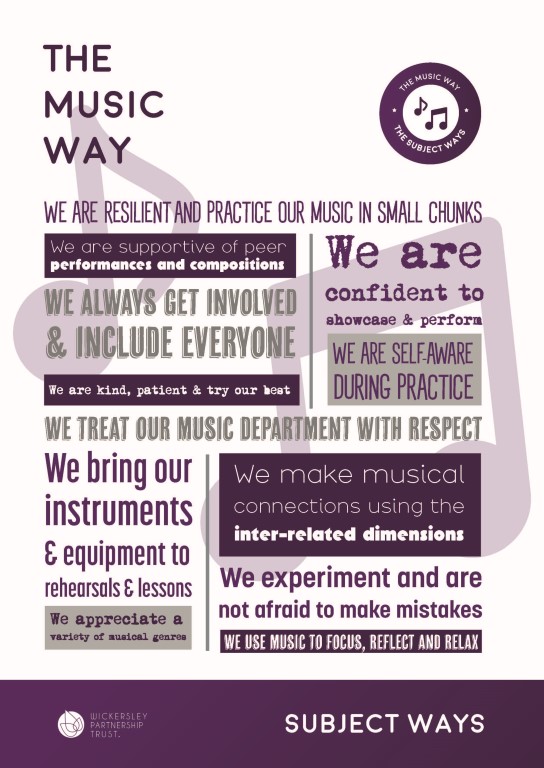 In Music, we aim to provide an exciting, relevant and inclusive curriculum where students can learn to be creative, confident and skilful performers. Through the delivery of a variety of topics, our students become experienced and passionate practitioners who have a clear love for performing arts. We would like our students to gain a wider knowledge and understanding of music and drama both practically and theoretically and to develop a wide range of skills that are used across the industry.

The goal is to inspire and engage students to develop a love of music and develop their talents through participation in a wide range of instrumental and practical skills. Through learning music, students increase their self confidence, creativity and a sense of achievement.

How we intend to remove barriers?

In Music, we help remove barriers to literacy by developing writing skills through song writing and increase students’ understanding of how to research effectively. Students have the opportunity to read and analyse various lyrics which helps in widening their vocabulary. We broaden their knowledge of the discipline through subject-specific terminology, which is used frequently and consistently across practical and coursework based lessons when giving answers and feedback. In addition, retention is assessed through regular low-stakes testing during starter activities.

We allow ample opportunities for group discussions in lessons around specific topics and promote creative collaboration where possible when producing a piece of work. Example techniques to support students’ oracy include Think, Pair, Share, planned questioning, and modelling.

How do we develop skills for learning?

In Music, we develop skills for learning by encouraging consistent use of subject specific keywords and development of correct and relevant terminology. Our curriculum is designed to allow students to advance in topic based skills throughout each year of study and revisit important terminology through constant recall. We provide opportunities to improve memory through learning lyrics or chords/notes off by heart in order to move their focus away from sheets and more towards specific performance skills.

We offer discussions around differences in opinion and respect others views and subjective tastes when looking at different cultured pieces of music. We help students get a better understanding of the lyrics and the emotion behind specific vocabulary that is used. Being creative is a key component of our subject and we encourage this through composing and writing music and creating different performances. We analyse and listen to different styles of music. We have multiple opportunities to review and reflect on performances and student work allowing for constructive feedback of themselves and their peers.

How do we foster personal attributes?

In Music, we foster personal attributes by promoting independence through solo rehearsal and encouraging self-motivation to progress. We enable students to overcome difficulties in musical technique and deal with performance anxiety when performing in front of an audience. We help promote a growth mindset and show how mistakes are an important part of learning. From this, we demonstrate how to bounce back from a disappointing performance.

We encourage all forms of communication and understanding of emotions and expression especially with peers, themselves and their audience. Collaboration with peers and in groups allows for opportunities to work with students outside their usual friendship groups and other year groups. This includes working on the many extra-curricular events including the annual talent competition ‘Thrybergh’s Got Talent, and collaboratively with the Drama department in the school productions. We have high expectations in lessons that are followed to help students grow in terms of performance and self progression. From this, there is mutual respect for both peers and staff.

How we intend to enrich student experiences and broaden the horizons of students:

Within Music students learn about the cultural context of a wide variety of different music styles, including British and European classical music, as well as contemporary music genres which reflect modern, multicultural Britain, including rap, R&B, and how music can be used to promote diversity and tolerance.

Students also learn the cultural background in which certain music styles became popular, including reggae, and how this was used as an agent for social change. Students also develop their social skills by working together as a band, by demonstrating effective team work.

Our Subjects at KS4